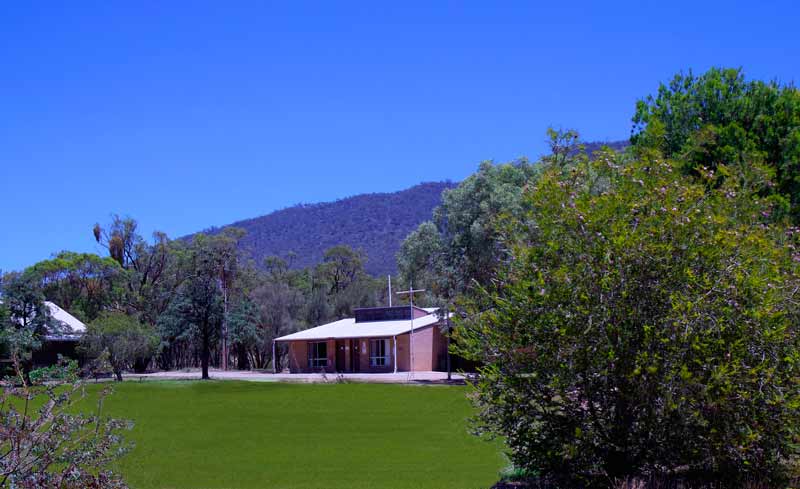 In April 1990, Milos Sulda resigned as Warden of the Centre, after serving for six years, and moved to Port Lincoln. After a lengthy process, with some 80 applicants, the successful candidate was Mr Paul Monaghan, who came from Sydney with is wife Helen and young family.

In February 1992 Mr Laurie Bishop, who with his brother Walter donated the land for the Centre, was thanked by Bishop McCall for his many years of service on The Management Committee. For much of that time Laurie was the Chairman, until ill-health forced his retirement. Laurie said: “When we gave the land, I had no idea that it would turn out the way it has. I even wondered why anyone would want a swimming-pool when that was suggested!” Laurie died just a few weeks later, in March.

At its meeting at the Centre in February 1992, members of the Committee not only inspected the buildings and property, but also planned a roadway through the grounds to make for easier access to the kitchen for the off-loading of supplies. They also looked into ways to upgrading the Bishop Jones Hall to make it more comfortable for meetings, and hence allow the Chapel to be used solely for worship. A barbecue area was added ton the northern side.

Paul Monaghan resigned in July 1993, and moved away after serving as Warden for three years. His place was taken by Mr Jon Burtonwood, of Elliston, with his wife Yvonne and two small children. He took up his post in October 1993, Malcolm Paech of Port Augusta and Adam Harrison of Clare cared for the Centre until Jon arrived.

John resigned at the end of 1994, to go back into self employment. The new appointee was Mr Hans Kent, with his wife Marianne. Regrettably Hans was not able to continue due to his sudden and unexpected illness, and he had to retire in early 1995. Before he left he was determined to supervise some upgrading of the facilities. Gas mains were laid from an outside bulk tank to two new industrial gas stoves. in the kitchen (two huge ovens and ten burners), and to hot water systems in the Bannon Wing and half of the Jubilee Wing. The remaining solar systems in the Jubilee Wing would be replaced with gas as they cant to the end of their life. The swimming pool was also upgraded to comply with Government regulations for public pools, including the installation of an automatic disinfection system. Eroding plumbing was replaced with PVC piping. Hans also installed an outside shower at the pool. Sadly, Hans died in September 1995.

The Committee was fortunately able to find a replacement Warden quickly when it became obvious that hans could not continue. The Young family – James and Mary, and sons Stuart, Cordon and Thomas, moved into the Wardens Cottage in March 1995. They had come from Caboolture, in Queensland.

And the rains came tumbling down

In February 1997 the Warden’s Cottage suffered flood damage during the unusual tropical rain which inundated large areas of South Australia. Despite the efforts of James and Mary and their boys, armed with brooms, shovels and sand bags, water flooded into the lower level of the Cottage, and swept under the house, seeping into the lower level back entrance, laundry, toilet and bathroom and into the living-room and rear bedroom. The Youngs were able to move most of the furniture off the floor before the water came in. James moved the tools and equipment tin the shed to higher shelves and opened the doors to allow water to flow through and relieve the pressure from the house yard.
The campers from the flooded rooms needed replacing and flood mitigating measures were taken in case of future downpours. In the Centre itself, blocked stormwater drains along the Jubilee Wing overflowed onto the verandah despite James’ earlier efforts to clear them of rubbish and weeds. Some carpets were drenched. Unfortunately the insurance policies did not cover flood damage from the ground. Donations for assistance were called for.

In December 1998, The Registrar Trevor Briggs made an impassioned plea in “The Willochran” for a public injection of funds to enable the battered and ageing American Wing to be replaced. “The replacement of that wing is essential”, he wrote, “before we can become an accredited Campsite.” No progress towards that replacement had been made as at the time of writing.

At the meeting of the Synod in May 2000 Bishop McCall informed the Diocese that he had been elected to the Diocese of Bunbury in Western Australia and that he had accepted the invitation. He and Marion were formally farewelled on 1st July in the Cathedral Church of Ss Peter and Paul.

Archdeacon Garry Weatherill, Administrator and Ministry Development Officer fro the Diocese, was elected to become the 6th Busgio if Willochra at the Special Call of Synod on 4th November 2000. He was Ordained as Bishop on Saturday 24th February 2001, in the St Peter’s Cathedral, Adelaide, and was installed in the Cathedral Church of SS Peter and Paul, Port Pirie, on the following day.

The new Bishop held his first Synod (the 2nd Session of the 30th Triennial Synod of the Diocese) at the Diocesan Centre in May 2001.

The Management Committee of the Centre became concerned in early 2003 when it learned that the name “Diocesan Centre” was too often assumed by “outsiders” to mean the Church Office at Gladstone. A new name was sought from the people of the Diocese via “the Willochran”. Two points for general guidance were offered: any suggested name must avoid any confusion with Church Office, and the place which was to be re-named was fundamentally a camp site. The most favoured name was “Camp Willochra”.

Camp Willochra is in frequent use, with most weekends and many weekdays booked. Some groups book two years in advance in oredr to secure a particular time-slot. And it is a very varied collection of organisations using it:

In 2011 the Camp celebrated its Golden Anniversary, 50 years of service to the Diocese and beyond. It is a wonderful resource. The Management Committee and Warden wort hard to maintain and improve the site.

Money is still not available to replace the old American Wing, and the Diocesan Budget still provides financial support.

The vision of Bishop Tom Homes and the Bishop family as extended beyond their most optimistic dreams. We give thanks for that initial vision and for all of those people who over the years have fulfilled and developed them.

The Youth Centre – the Diocesan Centre – Camp Willochra – is one of the most important assets, set in the beautiful environment and provide a great place for peace, study, play, and not least, worship.

THANKS BE TO GOD

The history of Camp Willochra was compiled by Canon Ian Barlow.